"Necrosphere is a mini-metroidvania where you play with ONLY 2 BUTTONS as Terry, the recently-deceased secret agent trying to escape the underworld!"

Please don't be put off by the graphics, this is a fun game that needs your attention. I am old enough to remember games like this when these graphics would be state of the art. A time when game-play came first and not how realistic the game looks. And lets be honest here, many games rely on amazing graphics to distract from the fact that the game itself doesn't have much to it. 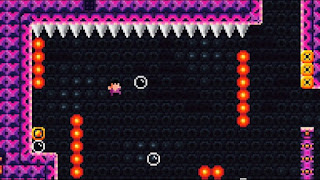 With Necrosphere you control your character with 2 buttons, yes just 2. That being left and right. No jump button, just left and right, and it is this simplicity that really gives this game an edge. And yes you do gain new abilities the further into the game you get, a dash function is an example. But by the time you get that fair you will be much more experienced with the basic controls. And the basic controls are what makes this game not only frustrating but incredibly rewarding too. You see as much as you will shout, swear and moan as you die time after time, when you eventually get it right, you feel as if you should be working for MI6 solving their hardest to solve encryptions.

If you asked me to describe this game in one word I would say "Frustrating", but then I would instantly tell you that I need to add "Addictive" immediately after it. Because this game is frustrating, but it is so addictive too that the frustration is very much part of its allure. 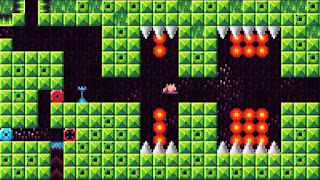 The learning curve is perfect, and once you have been playing it for a few hours, go and try a new game, and suddenly you will feel like an expert.

Surprising good game, and as I said previously frustratingly addictive.

Now go to Steam and buy it now!
http://store.steampowered.com/app/607400/Necrosphere/

Email ThisBlogThis!Share to TwitterShare to FacebookShare to Pinterest
Labels: Necrosphere