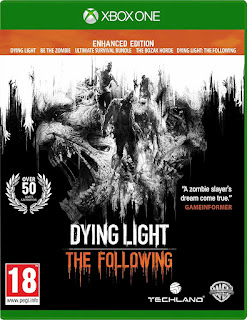 Review:
When I first loaded up Dying Light, I thought it would just be another open world Zombie game, but you soon realise it is so much more than that. The parkour element takes things to a completely new level.

Of course you still get to kill zombies, but you also get to set traps, search building for items you can use to craft new weapons, and as you progress through the games, the awkwardness at the beginning soon transfers into you racing along rooftops without a care in the world, well apart from the zombies below who want to eat your brains.

The game is much deeper than you first thing and the more you player and develop your character the more you get out of it.

With the various online modes, story points, challenges and so on, this is a game you will be playing for quite a while. And although it can be quite frustrating when you first start playing, as soon as you start to build up your character, that frustration soon turns into satisfying achievement when you unlock a new weapon, or figure out how to get to the point on the map you previously couldn't figure out.

Dying Light is a great game, and with the new content drops (see below) and new additions to the game, it can only get better.


Latest Dying Light News:
Following its arrival on PC back in July, PS4 and Xbox One owners can now get hold of Content Drop #0, which includes a new human enemy special forces unit – a heavily-armed new faction set to cause havoc in Old Town; a new ‘Harran Military Rifle available exclusively at Gemly.com; a new Mutated Goon Zombie; and a new ‘‘Hunted” player outfit.

Now Content Drop #1 adds three truly unique weapons: the Last Wish revolver, the Kuai dagger and the Fenris axe. Launching simultaneously across PC, PlayStation 4 and Xbox One, each one of these lethal inventions has its own exclusive feature that will increase your chances of survival in the quarantine zone a bit. But first the players will have to test their skills as these three weapons are rewards for completing the new special bounties. In addition to that, Gemly.com will provide the usual exclusive set of content that will be activated throughout the week, including the “Ye Old Trusty” wrench.*

Drop #0 and Drop #1 are the first two content packs with Techland set to release nine more over the coming months. Not only that, as players and fans are encouraged to share their ideas and suggest what goes into future content drops.

Dying Light: The Following - Enhanced Edition is now on sale - visit gemly.com for more details about all ongoing sales.