MARCH 28th, 2018 – Dynamic new developer, DEVCUBESTUDIO is today proud to announce that its debut VR shooter for Oculus Rift and HTC VIVE is coming to Steam Early Access on April 5th. FARHOME is a unique science-fiction game that teleports users into the year 2301, where earth is at the brink of a global catastrophe.

FARHOME is DEVCUBESTUDIO’s first foray into the VR world, and an exciting time for the studio.  The 50-strong team are pulling on their combined experience to, not only create an action-packed first-person shooter, with an in-built co-op option, but create something that treats its players to an immersive team-based science fiction adventure. 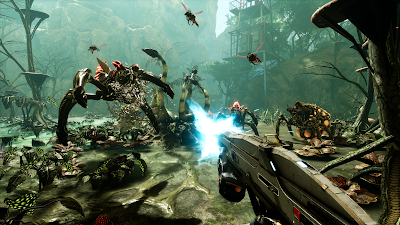 Players can choose from two individual character classes during early access and have the chance to explore different planets, all with their own distinctive environments. During each expedition, players will encounter several unusual inhabitants that will either help or hinder them on their journey.

The DEVCUBESTUDIO team is developing tools for the potential of expanding the game by users as they continue to work on the title throughout 2018/2019.

Email ThisBlogThis!Share to TwitterShare to FacebookShare to Pinterest
Labels: FARHOME