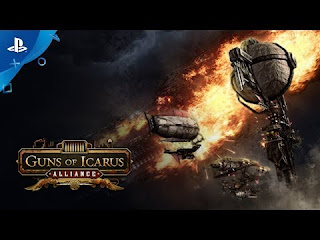 The ultimate team-based steampunk airship combat game where six factions vie for control of a world ravaged by machines. Become a Pilot, Engineer, or Gunner in epic PvP and PvE airship battles, with 4 players manning each ship. Repair your ship’s armor, gun down enemies, and deftly weave in and out of combat to dominate the skies. In Guns of Icarus, you and your crew triumph or perish, together.

Email ThisBlogThis!Share to TwitterShare to FacebookShare to Pinterest
Labels: Guns of Icarus Alliance