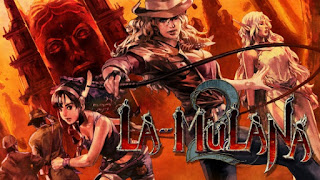 July 18, 2018 - Osaka - PLAYISM is proud to announce today that the long-awaited La-Mulana 2 will be releasing on Playism, Steam, Humble Store and GOG. A special event is also scheduled for July 29th, with more details to come soon.

The long-awaited sequel to La-Mulana, La-Mulana 2 follows Lumisa Kosugi as she explores the ancient ruins of La-Mulana, desperate to find the cause of the numerous recent appearances of monsters from the ruins, Lumisa discovers “other” La-Mulana: the ruins known as Eg-Lana.

La-Mulana 2, which garnered support from 5200 people on Kickstarter in 2014, is finally seeing its release on Playism, Steam, Humble Store and GOG for $24.99.

In anticipation while we lead up to the upcoming La-Mulana 2 release. Playism will be hosting a special event, which will be live streamed, on July 29th!

In LA-MULANA 2, you take on the role of Lumisa Kosugi - daughter of the previous title’s hero - as she explores the ancient ruins of La-Mulana, said to be the cradle of human civilization. Desperate to find the cause of the numerous recent appearances of monsters from the ruins, Lumisa heads to the “other” La-Mulana: the ruins known as Eg-Lana.

Explore the vast ruins comprising multiple field maps, solve mysteries and riddles using the stone tablets and messages you discover along the way, and take out the huge monsters known as “Guardians” as you make your way to the deepest depths of the ruins.

Features:
Become an adventurer and explore sprawling ancient ruins
Gather hints to solve the various mysteries of your adventure
Dive into the action as you fight off tough enemies seeking to stop your progress
A detailed and beautifully dot-rendered world
Seven main weapons and over ten sub-weapons
Over 60 items of various types to help you explore the ruins
Over 20 apps to install on your trusty adventurer’s tablet, the “Mobile Super X 3”
Includes reference book with over 200 monsters and other characters in the game
Posted by JD at 17:06

Email ThisBlogThis!Share to TwitterShare to FacebookShare to Pinterest
Labels: La-Mulana 2