August 1st, 2018 – MuHa Games, Polish-British indie developer and creator of Thea: The Awakening – the well-received hybrid of 4x strategy, RPG, survival and card game, has provided updated information on the launch of the sequel for this title, Thea 2: The Shattering.

After a successful campaign on Kickstarter, Thea 2: The Shattering is drawing its development cycle to a close. In September the beta version for backers (pledge £15 and more) will appear on the Steam platform. The game will be launched as Early Access title later this autumn, in November. The full game launch is scheduled for the first quarter of 2019.

MuHa Games will also be attending Gamescom 2018 in Cologne representing a selection of Polish developers chosen by the Indie Games Poland Foundation for the Polish national booth. The new gameplay for Thea 2: The Shattering will be presented during the fairs.

Thea 2: The Shattering will once again propose a unique blend of 4X turn strategy, RPG, survival and card game with an original dark fantasy setting inspired by Slavic myths and culture. Players will adopt the role of a god who looks after a tribe of followers while navigating a procedurally generated environment. They will have to choose their favoured play style – whether they prefer to wander and explore the world, take an aggressive stance of a warlord, or becoming the master diplomats with an array of alliances with other factions – and constantly gather resources and ensure the survival of their worshipers. Thea 2 also offers atmospheric graphics and music, perfectly illustrating the Slavic background of the narrative. Thea 2 will have a co-op multiplayer mode, free DLC content, adventures editor and modding tools.

MuHa Games invites all interested parties to meet with the team during Gamescom in B2B zone, hall 4.1 (the national booths zone), booth D-40. 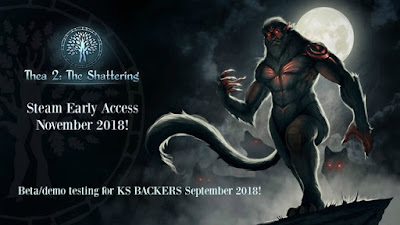 Email ThisBlogThis!Share to TwitterShare to FacebookShare to Pinterest
Labels: Thea 2: The Shattering