Following on from other recent "8-Bit" games, they continue the style of colourful, blocky pixel type graphics. This really does bring back memories for people my age of these types of games.

In the style of C&C & Tiberian Sun and Red Alert 1 & 2, people familiar with those games will instantly feel at home.

Best played with friends, but probably best to play through the single player missions first, unlock various things that way and then you will be better prepared for the multiplayer games.

This is a simple, fun game, perhaps not for fans of modern RTS games, but more for fans of old school games like Command and Conquer.

It might not win any awards for innovation or originality, but then that is not what this game is aiming for.

Perhaps the price is a little steep right now, but there is always a sale around the corner. 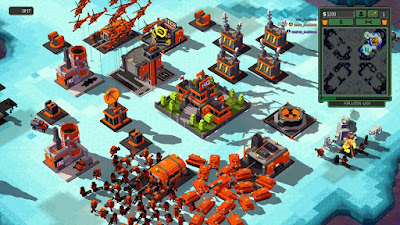 More about the game.

Blast from the past
8-Bit Armies is a tribute to classic RTS games and is suitable for existing fans and new players of the genre seeking a friendly approach to strategy gaming. With a colourful, blocky voxel art style, the game is accessible to anyone regardless of experience. Players will collect resources, build up and defend their bases, amass armies of easy to command military units, and ultimately crush their opponents!

The game is further enhanced with an all-original soundtrack from Command & Conquer music composer Frank Klepacki and is reminiscent of some of his greatest hits from previous Westwood Studios RTS games.

Built for Console
8-Bit Armies uses a unique and simplified control scheme allowing future generals to quickly control hundreds of units on the brightly coloured battlefield. Base-building, resource gathering, and even controlling individual units in your large army is easy to do. Research  devastating superweapons and use them to crush your opponents in the blink of an eye.

Obliterate your enemies in a variety of colourful, destructible maps
Complete 40 single-player missions and 12 co-op missions
Compete in online multiplayer with up to five other players or AIs
Enjoy easy controls that are perfectly adapted to consoles 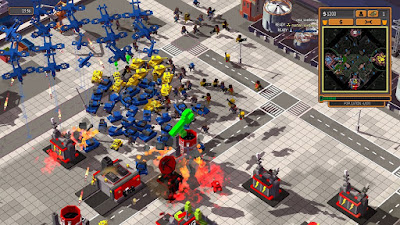