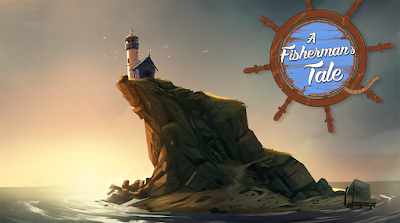 Playing with the incredible sense of scale unique to VR, Innerspace invented a unique VR gameplay mechanic based on the recursion principle. In a way, A Fisherman’s Tale is a co-op game - but instead of playing with others, you’re teaming up with multiple dimensions of yourself! Able to twist and bend your newfound, peculiar reality, you’ll be challenged with multi-dimensional puzzles on your journey to the core of an unusually tall tale.

What does it mean to be trapped inside a replica in an elusive virtual world? A Fisherman’s Tale at it heart is a story about breaking away from illusions to find truth. And who knows, you may learn something about yourself along the way…


Break more than a couple laws of physics in mind-bending VR puzzles!
Team up with yourself in revolutionary multi-dimensional single player co-op!
Meet some of the quirkiest sidekicks to have ever set foot in a VR game
Use your hands to pick up, throw, combine, and use all kinds of things in glorious fully immersive virtual reality!
Toy around with your tiny little model lighthouse, inside a lighthouse, inside a... is that another lighthouse?
Uncover the truth at the core of an unusually tall tale, exclusively in VR
A Fisherman's Tale will be available for PlayStation VR, HTC VIVE, Oculus Rift and Windows Mixed Reality in January 2019.

For more information, wishlist the game on https://store.steampowered.com/app/559330/A_Fishermans_Tale/, subscribe to the newsletter at http://afishermanstale-game.com

Email ThisBlogThis!Share to TwitterShare to FacebookShare to Pinterest
Labels: A Fisherman's Tale