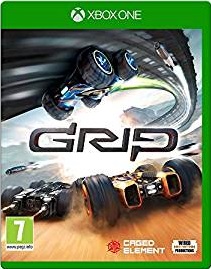 REVIEW: By Jon Donnis
I like GRIP, this is a fun game, and it is fast, and by fast I mean insanely fast.
This is a classic arcade type racer, that defies the laws of physics at every turn. You start off with your basic vehicle and then as you progress you can upgrade and get better vehicles. As you race you can race on almost any surface, which gives any race a whole new dimension literally.

As I said the game is fast but you never feel like you are not in control. And despite going at hundreds and hundreds of miles per hour, you can always pick up a power up that will give you a further speed boast. And talking of power ups, you can collect various weapons too, homing missiles, shields and so on.

The game play does however have a few flaws, some of the collision detection is annoying, you can go from 500 mph to 0 in an instant, and a couple of times from leading the race I hit the side of the finish line and ended up in last place. But this is nothing they wont be able to fix as various updates and bug fixes are released.

The soundtrack is awesome. As are the graphics.

Buy from Amazon by clicking here (Opens in a new window)

About the game.
GRIP is a high octane, hardcore combat racer, packing ferocious speed and armed to the teeth with heavy weapons.

Evolved from street racing, the world of GRIP is brutal and cut-throat. Winning the race is never enough, greatness comes from the journey and trail of merciless destruction you unleash upon your rivals.

Scale walls, ceilings and anything else you can get your tyres on to as you master tracks, tricks and perform mind-blowing stunts to race your way across the cosmos. Customise your vehicle, utilise devastating weapons and exploit a destructible environment to ensure not only victory, but the complete annihilation of your opponents.

Use gravity defying physics alongside a bristling arsenal of outlandish weapons, GRIP delivers the fastest, most competitive racing experience ever.

Email ThisBlogThis!Share to TwitterShare to FacebookShare to Pinterest
Labels: GRIP