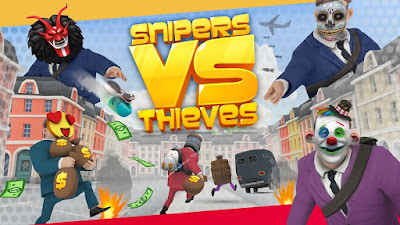 London, Thursday November 22, 2018 - Just over a year since its worldwide release across iOS and Android, the mobile sensation Snipers vs Thieves is deploying its biggest game-changing update ever, with more than 100 improvements and fan-requested additions.

The criminally-good update, which rolls out worldwide today, completely reinvents the game with new modes for hardcore players and rookies alike, as well as a stash of insanely fun new weapons, a payload of ingenious new gadgets, a gorgeous redesigned interface, and for the first-time ever, a single-player mode.

These additions come as developer FoxGlove Studios and publisher PlayStack celebrate the game’s most prestigious milestone so far: More than 25 million players have enjoyed Snipers vs. Thieves so far across iOS and Android.

“We are completely floored to see that in little more than twelve months since our global launch we have amassed more than 25 million players,” said Jan Lechner, Executive Producer at Foxglove Studios.

“This huge update is entirely for our fans, and for months we have been obsessed with making sure every player’s request has been listened to. It’s our way of saying thanks for making Snipers vs Thieves such a wonderful game to work on and such an incredible success story so far.”

Harvey Elliott, Chief Executive at PlayStack, added: “Snipers vs Thieves is immensely fun, easy to enjoy and incredibly popular with stellar ratings from our audience. We are sure that the 25 million players who have already enjoyed the game will love this huge update just as much as we do.“

A shortlist of the game’s biggest improvements and new additions follows:

NEW WAYS TO PLAY
Think you’re the best shot around? The new Sniper vs Sniper mode gives you a chance to prove your marksmanship prowess as you and another player pick apart packs of thieves, with the most successful shooter taking home the lion’s share of the reward.

Proving there really is no honor amongst thieves, a new Thief Race mode pits you against your crew. There’s only one seat in the getaway van, and the first to get there goes home with all the gold.
Got nerves of steel? A new Pro Thief mode offers the biggest, most eye-watering rewards ever. But there’s a catch: If a sniper takes down just one of your clan, you all lose.
For the first time ever, Snipers vs Thieves will include a single-player Horde Mode, where players take on the role of a sniper and take down wave upon wave of AI thieves that sneak, roll, and jump their way to the getaway van.

NEXT-GEN HARDWARE FOR SNIPERS
A devious arsenal of new toys are available to sniper players, ranging from disgustingly smart gadgets to brutally blunt add-ons. If you enjoy outsmarting your opponents, or love indulging in a spot of overkill, you’re going to love this:

Triggered Explosives: Launch mines onto the path of unsuspecting thieves and, when they’re close enough, light up the sky

Rail Gun: Act fast! You only have a handful of seconds to operate this remarkable feat of engineering, so make it count. Not only can the Rail Gun see through objects, it can shoot through them too. Thieves who never come out from hiding will be sitting ducks.

Air Strike: Add an element of unnecessary, dramatic overkill to the proceedings with the military Air Strike power. Select a zone and watch the chaos rain down from above.

Placeable Turrets: Let AI do all the work for you by affixing auto-aim turrets onto the enemy’s pathway. It’s a delightfully devilish way to drive thieves into your line of sight.

STUPEFYING POWER-UPS FOR THIEVES
Change the game when playing as a thief with this new eye-opening collection of tools and power-ups, guaranteed to deliver the biggest WTFs to your crime spree:

Vampire Run: Choose this potion wisely. Once you down it you can run at exhilarating speed, but your health drains away as each second passes.

Teleport: It’s the best kind of transportation you’ll find. Select this power-up to safely rematerialise at a nearby cover point of your choosing.

Buddy Speed: Arm yourself with this power for ultimate shenanigans. Select a thief and freeze them for a few seconds before they break from the ice with an incredible speed boost. The question is, are you using this to help or hinder your crew?