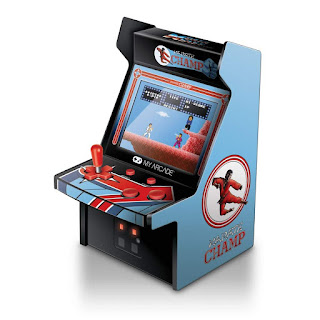 My Arcade Karate Champ Micro Player
Karate Champ was a classic arcade game released back in the mid 80's, if you were alive then and between the ages of about 6-16 then you probably spent a fair few 10 pence pieces on the game.

I got my hands on one of these mini arcade machines and I was very much looking forward to playing it.
Unfortunately it is not a direct port of the original Arcade game, but instead it is an emulation of the NES version. So that was a bit disappointing. But that aside there is an element of buying one of these machines not just for the nostalgic feel of playing a 36 year old game, but also for the artwork of the box. It is as much a piece of art that you will have on a shelf as it is a game you will play.

Personally I have mine sat on my little bar right next to my bottle of whiskey.

At roughly £30 these aren't that cheap for what you get, but overall its a fun little unit, gives you that nostalgic feel, and looks great. A definite head turner. 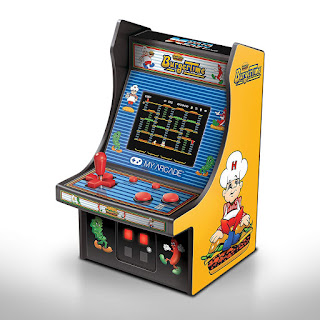 Review by Jon Donnis
Unfortunately much like the Karate Champ game, this is also an emulation of the NES version and not the original arcade version, that aside it is still a fun little game, although it is missing some sound effects, the difference to the original is hardly noticeable.

I was never a big fan of the original, so I wasn't as excited to play this as I was the Karate Champ game, however I have to admit I do like this game.

Much like Karate Champ, the artwork is great, and it looks great sat on a bar or a shelf as a piece of art. Another head turner.

Summary
There are more games in the "My Arcade" range, so my advice is to have a good look, and read the reviews but also ask yourself why you are buying them. Some people will love them, some will be disappointed.
I cant be fairer than that.