Wired Productions Partners with Highly Decorated Studio, Storm in a Teacup to Publish the Heart-Racing Horror Adventure Game Close to the Sun 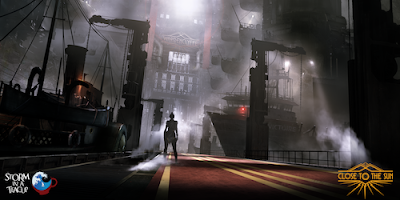 WATFORD, United Kingdom – December 18, 2018 - Wired Productions Ltd., a leading independent video games publisher, and decorated Italian development studio, Storm in a Teacup, are today delighted to announce a new partnership to bring the narrative horror game Close to the Sun to PlayStation®4, the Xbox One family of devices, including the Xbox One X and Windows PC, in 2019.


Recipient of an Unreal Dev Grant in 2018, Close to the Sun is instantly recognisable for its breathtaking art deco aesthetic, painting a unique and alternative vision of history, and a second age of scientific enlightenment at the end of the 20th century. Prospective players will guide Rose as she sets foot aboard the Helios – a colossal and mysterious ship, created by Nikola Tesla, as a haven for scientific progress, isolated from society and the threat of corporate espionage.

“Close to the Sun is a beautiful and unique title which showcases both the talent of the developer and the calibre of experience synonymous with the Wired Productions brand,” Said Leo Zullo, Managing Director, Wired Productions. “Our pipeline for 2019 builds upon the quality titles we’ve brought to market over this past year, and we couldn’t be happier to announce this partnership with Storm in a Teacup.”

Carlo Ivo Alimo Bianchi, CEO & Founder, Storm in a Teacup, continued: “We’re delighted to partner with Wired Productions and to see Close to the Sun benefit from their experience in titles with that extra level of depth. Working together enables us to focus on perfecting a game that we truly believe will be a new benchmark for Storm in a Teacup; a title that brings story, horror and character development together to a new level.”

Close to the Sun will release in 2019, but you can follow the game now to receive future updates on Facebook https://www.facebook.com/closetothesungame or http://www.closetothesungame.com
Posted by JD at 13:19