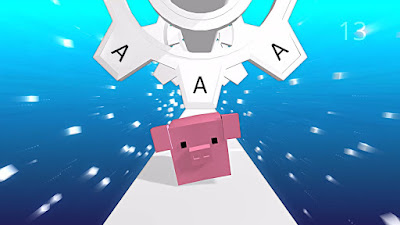 Review by Jon Donnis
Of all things you can simulate on a games console, a clock seems to be the last thing you would want to simulate. After all aren't all clocks "Time Simulators"?

In Clock Simulator you have a collection of mini games, each game revolves around the idea of you pressing a button once every second. The closer you get to pressing the button every second the better you do and the higher score you get.

The game has a really cool ambient soundtrack. But other than that I just found the games repetitive and rather boring. Which is kinda the point of the game I guess.

I decided to get some other opinions, so first I gave the game to a 9 year old girl to play. She played it for around 20 minutes and said it was boring.

I then gave the game to a 68 year old woman. She was even less impressed. And then I played it for myself. I found myself going through the mini games one by one, some I had one go on and then went straight onto the next game, a few I had a couple of goes at as I was a bit confused as to what I was supposed to do and I want to make sure I beat any score that the 9 year old had got. After all I am still competitive and I must be the best at everything. And a few games I had no idea the point and stopped after a few seconds. And sadly I think that may end up being the experience of most people.

I even found myself looking at a real clock in the room and following the second hand as it moved to help me get the timing right, I am sure that would be classed as cheating, either way a game where I am not even looking at the screen and I can do better seems strange.

I am sure this game will appeal to some people, perhaps those with OCD, or even children/adults who enjoy counting, and there are many people who fit that bill.

The positives are it has a great little soundtrack which is relaxing. The graphics are fine for what it is.
The negatives are that the game seems a little lackluster.

The idea for the game is fine, but the execution is a little poor. I think the makers should have tried to make the game have more peril. For example have a mini game where you need to click every 10 seconds, but as that is happening you have sound effects to confuse you or put your off.  A crazy man on screen shouting random numbers at you. I think distraction based mini games would be much more entertaining, and make the game much harder, and inevitably raise the challenge aspect.

As it is though, after getting the opinion of 3 different generations and sexes, and combining those opinions, I can only give the game a 4/10

It has potential and perhaps the creator will release updates and new mini games.
Have a watch of the trailer below, and if you disagree with my review leave a comment.