REVIEW: Octahedron on Xbox One - Also coming to Nintendo Switch on January 17th 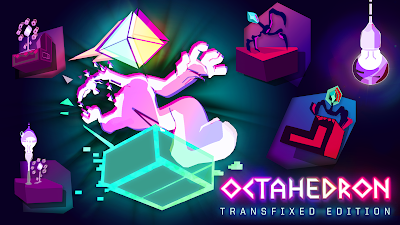 Review by Jon Donnis
I published a preview for Octahedron a few weeks back and I just had to play it, the games is very reminiscent to the kind of games I loved back in the 1980s. But with Octahedron you have a full on neon psychedelic experience that is truly something special to behold.

The basic mechanics of the game involve you controlling your character as he/she tries to get from one place to the another on each level. You can place platforms out of thin air and then you use them to reach different places. Sounds easy right? WRONG. This game has a steep learning curve. And although frustrating at times, it never makes you want to just give up, it just makes you want to keep trying it until you get it right, for you can see what you need to do, you just need to get it right, and when you finally do it is very satisfying.

The game has a great soundtrack which includes "chiptune trance over synthwave to progressive house" and really is a plus to the game.

In my opinion this is an "old school" game but with the modern graphical and musical twist. It will appeal most to the older gamer who perhaps remembers these types of games, and due to the nature of the game I sense that it may perhaps take too much patience for the younger gamer who wants everything given to them on a plate.

I loved the game, and it is one I will probably still be playing in a few months if not longer.

Watch the trailer below to get a good idea of the game and enjoy the awesome soundtrack.

Octahedron launched on Steam, Xbox One and PlayStation 4 in March this year. And is out on Nintendo Switch on January 17th.

Email ThisBlogThis!Share to TwitterShare to FacebookShare to Pinterest
Labels: Octahedron