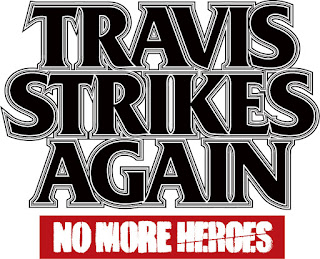 In accordance with the game’s release, we also wish to announce a new collaboration with a few especially legendary titles, stage information, and additional patch contents.

The return of Garcia & Johnson: One of the game’s stages, “Serious Moonlight”, is based on the hit title Shadows of the DAMNED!
“Serious Moonlight”, one of the games playable on the in-game console of legend known as the [Death Drive Mk II], is a battle-action game based on the 2011 release Shadows of the DAMNED, for which Goichi Suda took the helm as Executive director.

This stage was created from the world of Shadows of the DAMNED. In this game, main character and demon hunter Garcia has died and his former partner Johnson the skull, reborn as a hero, appears as the character Eight Hearts.

Additional patch “Day 7 Patch”
A patch will be made available seven days after release, and will add a new opening movie.

About Travis Strikes Again: No More Heroes
Several years have passed since the events of No More Heroes 2... This time around, the setting is a small town in the middle of nowhere in the American South. Badman shows up at the trailer Travis has been living in to exact revenge for the murder of his daughter, “Bad Girl” – and things go horribly wrong. As they battle it out, the two are sucked into the game world of the legendary game console, the “Death Drive Mk-Ⅱ”.

Developed by Dr. Juvenile, the Death Drive Mk-Ⅱ has six games contained on “Death Balls”. It’s said that collecting all six and then beating each game allows the player to have one wish granted. Travis and Badman team up to seek out the Death Balls in order to bring Bad Girl back to life.
Posted by JD at 14:45