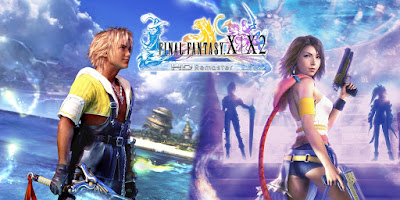 Review: By Jon Donnis
Final Fantasy X/X-2 HD Remaster perhaps is not the catchiest of titles, but it is a fair description of what is a remastering of the Final Fantasy X and Final Fantasy X-2 games from the early 2000's which were released then on the Playstation 2.

At the time FFX was widely called the greatest game of all time, and received a sequel which was a first for a FF game.

The thing to keep in mind is that this is not a step by step remake, it is a remastering, so it is still graphically a product of it's time, so it is never fair to compare a game from 2001 to one released today, that said the graphics are still very impressive, and this was the first FF game to be fully 3D, as opposed to backdrops being rendered separately.

The basic storyline in this is that you play as Tidus in the world of "Spira" and he is on a journey in unfamiliar places, you have a gang of good guys fighting against an evil Kaiju known as Sin trying to take over the world. So pretty standard fare there.

As you cross the various areas you will take part in many turn-based strategy combat situations against the usual hillariously named enemies.

It could be argued that this type of combat has aged badly, but as I said this game is a product of it's time.
The second game stars Yuna as it's main character and continues on well from the previous game. It also contains way more mini games which was always a favourite of mine throughout the various FF games.

Overall if you are a Final Fantasy fan and either want to replay a great game, or you want to play the first true 3D game in the franchise then this is a great game to buy and play, you will get literally hundreds of hours of gameplay which is something not many games from this era can claim.

I score this game a strong 8/10. Still packs a mean punch 18 years after it was first released.

The Final Fantasy X/X-2 HD Collection is out now on PlayStation 4, Xbox One and Nintendo Switch. 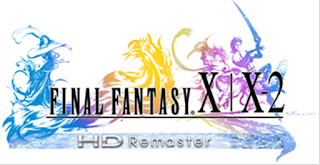 FINAL FANTASY X/X-2 HD Remaster brings both beloved titles to long-time fans of the series and a new generation of players in stunning high definition, complete with new features including new challenges, gameplay modes and more.

FINAL FANTASY X / X-2 HD Remaster is now available both physically and digitally for the Nintendo Switch™ and as a digital-only title for the Xbox One family of devices. Physical copies of the game for Nintendo Switch™ also include a reversible sleeve featuring beautiful art of the title’s heroes.