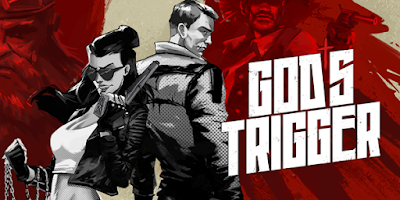 Like the Da Vinci of death, Techland Publishing has unleashed a new gameplay trailer demonstrating the fine art of killing in God’s Trigger, a brutal, fast-paced, top-down shooter, in which players can use supernatural powers to cause spectacular mayhem in a quest to stop the Apocalypse.

Ever wondered what it’s like to have powers from both Heaven and Hell? God’s Trigger allows players to go on the rampage as Harry, a fallen angel, or Judy, a demon. Each of these two characters has 7 unique abilities that players can upgrade, customize and combine with others to create their own visceral style of dishing out death. In a game where any hit is fatal, being able to slow down time to dodge bullets or to become invisible will be key to survival.

In the solo campaign, players will be able to seamlessly switch between the two characters at anytime and have access to all of their respective skills and powers. Partner up with a friend in co-op to create even deadlier and more explosive combos, crushing enemies in no time and making the most of the 14 abilities and 36 weapons the merciless duo has at hand.

In Harry and Judy working together the true artistry of carnage is revealed; players can annihilate foes with a huge number of devilishly creative combos, such as setting up a Wall of Fire that will imbue passing bullets with the energy of hell and have them explode on impact, or creating a Dark Vortex to suck enemies together and ripen them for melee brutality. Player death will be simply a passing inconvenience in the cycle of creative destruction.

In the world of God’s Trigger, survival depends on the ability to make split-second decisions, and massacre enemies with a variety of guns, melee weapons, special abilities and environmental traps throughout visually spectacular bloodbaths. Prepare for unforgivingly intense, brutal action where just one pull of the trigger is enough to kill the enemy—or you.

God’s Trigger is set to release digitally for PC, the Xbox One family of devices, including Xbox One X, and PlayStation 4 on April 18, 2019.