Doctor Who - The Edge of Time - Gameplay Trailer | PS VR 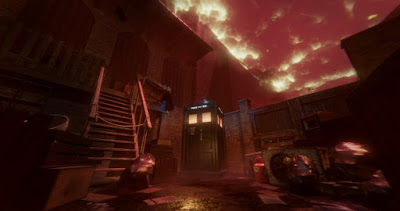 First look gameplay footage from Doctor Who – The Edge of Time. This early beta code was showcased at Comicon San Diego and is taken from the opening level of the feature length game, out this September on PlayStation VR. Includes the Immersive 360 title sequence from the show.”

Published by PlayStack and developed by Maze Theory, Doctor Who: The Edge Of Time will transport fans into a globally-beloved world of aliens, mystery and wonder, letting them embark on a brand-new and fully-interactive adventure, inspired by the show’s 55-year history and starring the Doctor’s current incarnation, played by Jodie Whittaker.

Armed with the iconic Sonic Screwdriver, players will solve mind-bending puzzles, grapple with classic monsters and encounter new horizons in a quest to find the Doctor and defeat a powerful force that threatens to destroy the fabric of reality. They will face the infamous Daleks and other known faces from the Doctor’s world plus some brand new never-before-seen monsters as they travel through stunning cinematic environments that truly bring the show to life!

SYNOPSIS
The Doctor has been hurled through time to the end of the universe. A virus that threatens to rip apart reality itself has been unleashed. Players can pilot the TARDIS on a journey across worlds both familiar and strange to recover a series of powerful time crystals that can repair spacetime and ultimately, save the universe itself.

Email ThisBlogThis!Share to TwitterShare to FacebookShare to Pinterest
Labels: Doctor Who