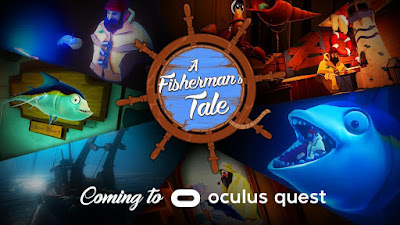 San Jose (CA), 25 September 2019 - Today, Vertigo Games and InnerspaceVR have announced their award-winning VR title A Fisherman’s Tale is coming to Oculus Quest later this year. The announcement was made at Oculus Connect 6 in San Jose, California. The mind-bending VR puzzle adventure is already available on PlayStation VR, HTC Vive, Oculus Rift and Windows Mixed Reality headsets since its initial launch on January 22, 2019.

The critically acclaimed A Fisherman’s Tale utilizes innovative game mechanics exclusive to VR, making it a truly unique and immersive experience. Players work with infinite, even smaller and bigger replications of themselves, using real-life movements to pick up, throw, combine and use all kinds of objects to solve puzzles and find their way out of a world where physics are utterly broken. Set in a world of infinite recursion, A Fisherman’s Tale is a journey of introspection and extrospection that requires the player to reach both inside and outside themselves if they want to uncover the truth of an unusually tall tale.

“We are thrilled to announce that A Fisherman’s Tale will soon be available on Oculus Quest,” Said Balthazar Auxietre, creative director and co-founder at Innerspace. “We are putting in all our efforts to create an experience that is on par with the PC version, but with the complete untethered ease offered by Quest. We have been amazed by how powerful the platform is for such a compact and affordable device. Being able to bring our game to a new platform with such potential is really exciting and we hope that Quest users will be delighted by the adventure of our little fisherman puppet.”

The mind-bending VR puzzle adventure A Fisherman’s Tale is already available on PlayStation VR, HTC Vive, Oculus Rift and Windows Mixed Reality headsets since its initial launch on January 22, 2019. Later this year, VR players can bend and twist reality when the game launches for the Oculus Quest. For more information, visit afishermanstale-game.com 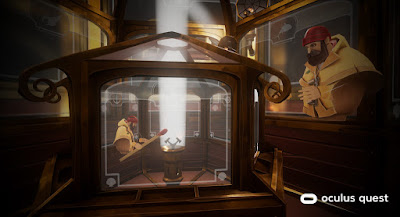 Email ThisBlogThis!Share to TwitterShare to FacebookShare to Pinterest
Labels: A Fisherman’s Tale