Close to the Sun Game Preview - Xbox One 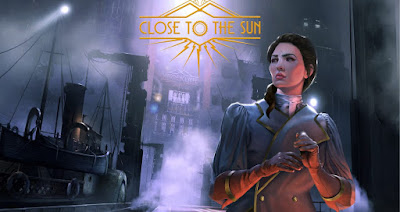 Close to the Sun is a first-person story driven horror game, already released for PC, it is released on consoles at the end of October. I got my hands on a Xbox One preview code thanks to the good people at Wired Productions, and I played the first 3 chapters.

The game is set in an alternative 19th century, where Nikola Tesla achieved much of what conspiracy theorists claimed he was stopped from doing, and he has indeed changed the world.

Visually the game will instantly remind you of Bioshock, but the game plays very different. You control a journalist called Rose, and you find yourself aboard Tesla's huge scientific vessel the Helios after receiving a message from her sister Ada.

Close to the Sun is a first person horror game, and leaves you completely immersed in a world whereby you have to explore and solve mysteries, all the whole surrounded by what can be a very scary environment.

The game itself although lacking in some gameplay areas, this is very much an examine everything and follow the storyline type of game. The game plays more like a way to better understanding Tesla, his mind, his motivations, all the way finding yourself terrified by the set pieces. And the jump scares will get your heart pounding.

The puzzles you solve are on a fair learning curve, with the earlier puzzles being quite simple, and as you progress through the game they slowly get harder and really test your memory skills. And I do enjoy these types of games, and I am the kind of person who really tries to follow every aspect of the story and take it in, not to mention my handy notepad I always have with me to help me with the puzzles.

Close to the Sun is a horror game, it is not for kids, this is a challenging game at time, but I am sure by the time you complete it you will feel a great sense of accomplishment, not only at beating the game but by feeling a part of the game and understanding better what Tesla could have been.

I look forward to getting my hands on the final game.

Close to the Sun is available now on the Epic Games Store and set to release later in 2019 on PlayStation 4, Xbox One and Nintendo Switch.