Edna & Harvey: The Breakout - Anniversary Edition to launch for the first time worldwide on consoles 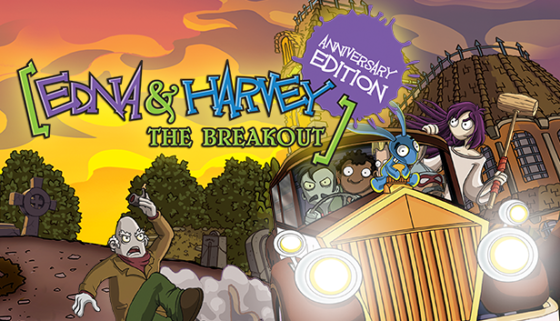 From 17 June 2020, the award-winning adventure hit from Hamburg-based adventure game specialist can be played on PlayStation 4, Xbox One and Nintendo Switch.

Edna & Harvey: The Breakout - Anniversary Edition promises another crazy adventure, in which protagonist Edna plots her escape from a mental institution with the help of her sage advisor, a plush bunny called Harvey. The route out of incarceration is littered with devious puzzles, a liberal smattering of pop culture references and some truly fun times.

At the original launch in 2008 the adventure received wide acclaim and several awards. The quirkiest of cult adventures set new standards within the genre and is set to captivate a whole new generation of console gamers with its new edition. Existing fans and current adventure gamers will be able to enjoy a classic point-and-click adventure in an all-new guise.

For the anniversary edition, the iconic graphics have been redrawn from scratch and converted to HD without distorting the distinctive art style of the original and its successful sequel “Harvey’s New Eyes”. In addition, improvements to the interface and a control system adapted to consoles were implemented.

Features:
The award-winning story and puzzle design of the original for the first time for console players
20+ hours of adventurous gaming fun
Unique comic style, with beautiful cel-shaded visuals
Many funny characters and exciting dialogues
Switch between original and modern HD graphics at any time
Improved control mechanics and user interface for console

You can find further information at https://www.daedalic.com/edna-anniversary-10th

Email ThisBlogThis!Share to TwitterShare to FacebookShare to Pinterest
Labels: Edna & Harvey: The Breakout