Review By Jon Donnis:
I was sent a review copy of Concept Destruction by Ratalaika Games S.L.
And I was rather excited to receive it after I had seen the trailer. The first thing I thought was that we finally had a successor to a game I loved over 25 years ago on PS1 called Destruction Derby.

If you are old enough to remember that classic, much like me you are probably baffled as to why we never got a remake. Well now you don't need one as we have Concept Destruction. The idea is basically the same, you drive around in a car, you have multiple opponents and the winner is the last car standing. But with this game made by Thinice Games, the cars are made out of cardboard, and you play on a table top. It's a nice twist on the genre which as far as I can recall is completely unique. 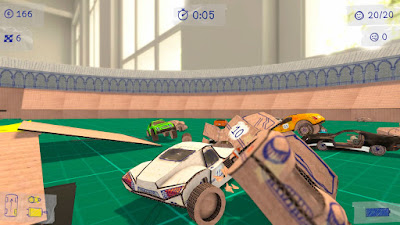 You have different modes, of course you have a championship mode, whereby you have to play on various tracks, accumulate a score, and try to position as high as you can. Pretty straight forward. You also have a simple School mode, which helps you learn the basic controls, a Survival mode, which is exactly what you think it is, and a tourism mode, whereby damage is off and you just drive around destroying other cars. 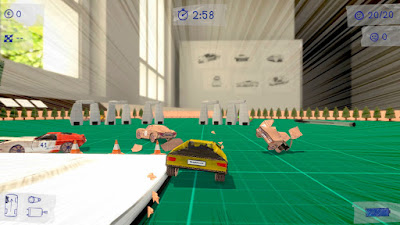 Overall it is a simple concept which works really well. The game is incredibly fun, highly addictive, and has enough in it that will keep you coming back. I am not sure if they will release updates with new tracks, cars etc, I really hope they do, but I guess that will very much depend on the popularity of the game. But for just a fraction under 5$/€ on all formats, this game is cheap enough that it should be a huge hit.

I really loved the game, and with the multiplayer options on there as well, which unfortunately I was unable to try, this is a game that can only grow over time. 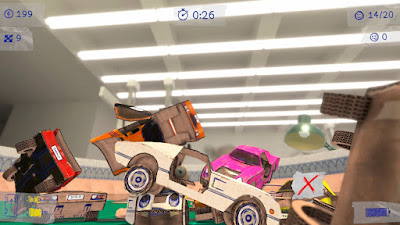 So lets quickly go over the Good and the Bad.

The Good, Pretty much everything, the graphics are great for what they are, perhaps more background work could have been done just to make things prettier, but for the actual game play the graphics are as good as they would need to be, the sound effects, music and all of that are also of a high standard, and most important of all the game play is a lot of fun.

The Bad, the only thing I can really complain about is that I want more, I want more tracks, more cars, more modes of play. The fact I want more is a testament to how good this game is.

Just scroll down and watch the trailer.

‘Concept Destruction’ will be priced for 4.99$/€ for all platforms and is out now!