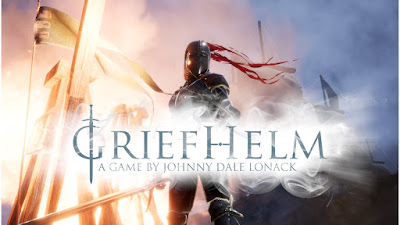 Developer Johnny Dale Lonack and Thorrnet Publishing have announced that following a hugely successful debut during the Summer Steam Game Festival the highly anticipated medieval tactical dueling game Griefhelm, will be slashing its way onto PC on August 20, 2020.

Set in a deadly, violent medieval world, Griefhelm is an award-winning tactical dueling game with lethal medieval weaponry. Wage battle and skewer your enemies, deflect their blows, and push your advantage as your tactically overcome foes in fast-paced duels. Every engagement begins a new dance to the death as warriors search for an opening. Master the art of combat to overcome your enemies and claim victory.

Experience a challenging, replayable campaign that will test the limits of your abilities on the battlefield. The replayable campaign will react to the paths you choose from over 500 narrative responses making each campaign run through feel fresh. Share your best battlefield experiences as each campaign can be played co-op with a friend or you can go solo and be a lone wolf testing your brutal skills as you take on the hordes of sword wielding enemies. Up to 4 players can battle it out in local multiplayer so you can fight with or against friends without leaving the safety of your couch! Abandon the heresy of peaceful rest. Reach out and lay claim to your eternal reward.

"We've been working hard to finish our tactical dueling game, Griefhelm, and are thrilled that we'll be launching this Summer" Commented Johnny Lonack, the game's solo developer. "I've been spurred on by the fantastic response during the Steam Game Festival, and can't wait to see players battle it out in online multiplayer!"

A new teaser trailer for Griefhelm has been released and provides a taste of the brutal medieval combat that awaits you on your quest for ultimate victory on the battlefield.


Features of Griefhelm:
Master fast, white-knuckle combat using a wide arsenal of medieval weaponry.
Challenge a dynamic, replayable campaign and claim your reward in Griefhelm.
Battle with or against your friends with online matchmaking.
Slay on the same couch with up to 4 people in local multiplayer.
Visually striking art style and hand crafted environments bring the world of Griefhelm to life.
Griefhelm will be available to purchase for PC via Steam on August 20, 2020.

Email ThisBlogThis!Share to TwitterShare to FacebookShare to Pinterest
Labels: Griefhelm