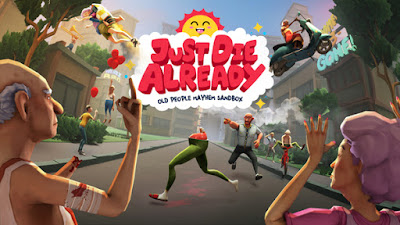 Hype for CD Projekt Red’s latest game is at an all time high, though DoubleMoose co-founder Armin Ibrisagic has suggested the studio was in no way influenced by endlessly re-watching Cyperpunk 2077 trailers, over and over during the development of Just Die Already’s flash new promo.

"We talk a lot about Cyberpunk 2077 at the DoubleMoose office and the trailer kind of just ended up like this unintentionally," offers Ibrisagic, sat in a home-made replica Cyberpunk jacket, complete with light-equipped pop collar. "Be cool, CDProjectRed. Don't sue."

You can watch the aforementioned ode to Cyberpunk 2077 below