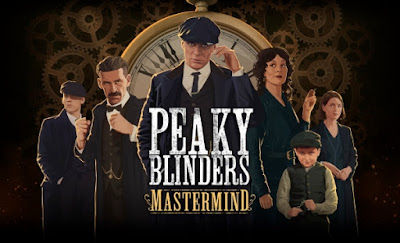 Review by Jon Donnis
I was kindly sent a review copy of Peaky Blinders: Mastermind on Xbox one by Curve Digital and Renaissance PR.

As someone from Birmingham, I have been looking forward to the Peaky Blinders game for a while. Based on the popular TV show of the same name.

You could best describe Peaky Blinders Mastermind as a "puzzle-adventure game", and it is set in a timeline of just before the start of the first season.

You play as members of the Shelby family, and each level you have to solve various puzzles, sounds pretty easy right, here is where it gets more complicated, you need to control different people at the same time, to do different tasks, you do this by rewinding time, so you might control one character for a minute or two, perform various tasks, but then you swap to another character, rewind time, so that while your actions with the first character play out, you might be doing something else with another character, which eventually helps you succeed in the level, I know it sounds a bit complicated, but once you get the hang of it, it all makes sense.

Sometimes you may need one character to distract a guard while you walk past, or to open a passage, get you a key, and as you progress through the levels, things get harder, as you need to complete various tasks with different characters all within the same timeline. You get a score based upon the speed of completing the level. Now the first time you attempt a level you may take a while to figure things out, but the great thing here is, once completed, you can try the level again, and now you know what to do, you can try to get as fast a time as possible. Repeating the level a few times, might seem tedious, but it is actually an interesting and challenging part of the game.

The graphics are great, and there is an original soundtrack for the game which I enjoyed a lot too.

The Good
Great graphics and soundtrack, a challenging game, with plenty of replay potential.

The Bad
At first I found the controls a bit tricky, and when you have only a short amount of time to rewind to achieve something, it can be a bit frustrating at first, of course with practice comes perfection.

Summary
A thoroughly enjoyable game, you do not need to be a fan of the TV show to enjoy this, it is a fun, challenging puzzle adventure game, and I give it a strong 8/10