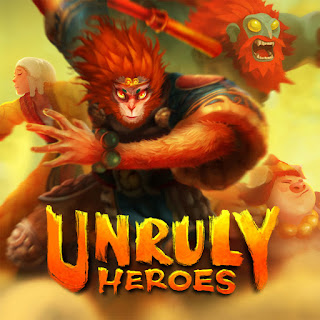 Unruly Heroes is AVAILABLE NOW on PS4 (including the Challenge Update)!

In solo or co-op, take control of four unlikely heroes that battle a diverse lineup of enemies and show off your Kung-Fu skills in this action-packed adventure.

Unruly Heroes is a platform video game developed by French company Magic Design Studios for the Nintendo Switch, Microsoft Windows, Xbox One and PlayStation 4. It is inspired by the Chinese novel Journey to the West.

Unruly Heroes features four characters (Sanzang, Wukong, Kihong and Sandmonk), that can be switched anytime. Each of them have their own unique skills and traits, like double-jump, gliding, or powers activated by special statues.

There are character-specific statues that can be used by pushing them into the right place.

While the game is based on Journey to the West, it differs a lot compared to it, making an adventure that is more humorous and lighthearted.

All levels are done in a Donkey Kong Country-esque way, in which the path forward is always clear, with branching paths along the way that usually lead to extra rewards.

Outside of a single-player adventure, the game can be played with up to four players. In the Underworld, the players will control child versions of the characters. There is also a Player versus Player mode, where battles can be done locally or online.