Review by Jon Donnis
Shaq Fu was an old Megadrive/SNES game from the 1990s, and unfortunately it didn't go down in history as a great game, quite the opposite. So news of a remake surprised many.

Shaq Fu is a classic side-scrolling beat 'em up, and this new version is a lot of fun. Think Streetfighter 2 meets Streets of Rage and you will have a good idea.

Plenty of ridiculous humour, political correctness is thrown out of the window, and you get to button smash your way through level after level.

The control system is responsive, you always feel like you are in control, even when you are bashing away at the buttons with loads of enemies on screen at once.

Lets be honest here, the game is not gonna win any awards for innovation, and you will probably finish pretty quickly, but that aside, this game doesn't pretend to be anything other than what it is, and old fashioned arcade style side scrolling beat 'em up. Sometimes you don't want to spend endless hours thinking too much, you just want to jump straight in and kick some ass, and this game does let you do that.

The graphics, sound are all perfectly fine, the gameplay although a tad repetitive is also fine.
I give  Shaq Fu: A Legend Reborn a solid 6.5/10 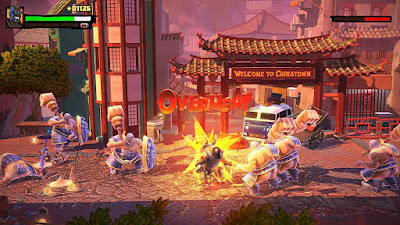 About The Game:
Shaq Fu: A Legend Reborn is an action-packed beat ‘em up starring the one and only Big Diesel himself: Shaquille O’Neal. Battle the hordes of Hollywood and hell on a one-man journey to avenge your fallen home and martial arts master. Smash down foes with devastating combos, face off against outlandish celebrity bosses, and unleash your fury with a variety of hard-hitting weapons and power-ups.