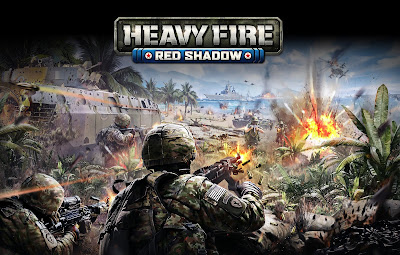 Set in the not-so-distant future, tension between a bold North Korea and the United States have gone beyond their breaking point.

In Heavy Fire: Red Shadow players lace themselves up in the tattered combat boots of Sgt. Will, who narrowly survived a North Korean missile attack on Guam designed to knock out its defenses, and now finds himself almost single-handedly trying to repulse a large-scale North Korean raid.

Step onto the unforgiving battlefield, establish a beachhead, and holdfast behind a turret-mounted machine gun. A brutal and unceasing onslaught of enemy forces will attempt to flank and eliminate Sgt. Will from every angle as he and a few surviving comrades rain hell upon anything that crosses their sights.

•        360° White-knuckle Action! Use a devastatingly powerful turret-mounted machine gun and rocket launcher combo to mow down enemies in 360° across eight stages in Campaign Mode, or fight non-stop in Endless Mode.
•        Call in Support! Call in supply drops and support from elite infantry troops, fighter aircraft, attack helicopters, and more.
•        Get Promoted and Powered Up! With more than 30 unlockable Field Promotions, players earn power-ups to upgrade and customize their machine gun, rocket launcher, health, and support skills.