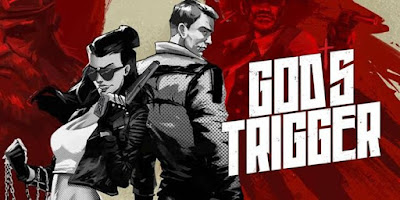 Review by Jon Donnis
As soon as I started playing this game, I was instantly reminded of PC classic "Hotline Miami".
And God's Trigger clearly takes a lot of inspiration from Hotline Miami.

At first the control system on this is a nightmare, it really is badly designed in my opinion, and I seemed to be forever pausing the game and checking the controls. This really is a huge problem, as there will be many people who will play this and give up pretty quickly. In time you will get used to it and you will forget that you ever had a problem. But this is still an annoyance of mine with some games. When creating a game, imagine that whoever playing it just wants to play, they don't want to learn how to attack, or transport through walls, etc, they just want to start the game, complete a few levels by killing everything easily, and have a feeling of accomplishment, then you can change up the controls, add new attacks and so on. This game fails in that respect as although it explains each new way of killing an enemy, it seems to be thrown at you all quite quickly, and you will find yourself dying multiple times before you have hardly got going.

That said, if you do stick with it, the game improves massively.

And because there control system has good variety, it does mean you have to really think sometimes how you will kill someone, will you use your close up weapon and go crazy, or will you use your limited longer range weapons, which may run out and leave you needing them for a later part in the level.

Sadly you don't really have any kind of health bar, so if you get shot or hit once, that's it you are dead, but there are plenty of checkpoints so it's not like you have to do an entire level again from scratch. Plus most enemies also die pretty quick, so it all seems strangely fair. 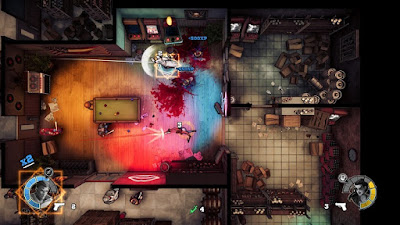 You play as Harry or Judy and can swap between the characters at will, and each have their different attacks and specialities. Which will also help you solve the puzzle elements the game throws at you.

The game is ultra violent as you would expect and you will end up leaving blood splattered everywhere.

The graphics are glorious as is the heavy soundtrack, if you are prone to motion sickness you might find the graphics a bit hard to play against, but the vast majority of people wont notice.

The game is good, I enjoyed it, but the poor control system thrown at you are the start, and some graphic glitches do effect gameplay.

I'll give this game a decent 7/10. Plenty of room for improvement.

Available on Xbox One