From today until 6th January 2020, budding builders that pre-purchase or purchase the game early on STEAM will receive bountiful in-game bonus content that will allow players to customise their DRAGON QUEST BUILDERS 2 experience including the following:

To pre-purchase the game for PC, visit: https://store.steampowered.com/app/1072420/DRAGON_QUEST_BUILDERS_2/

DRAGON QUEST BUILDERS 2 is a completely standalone experience that provides the perfect entry point for PC gamers curious to learn more about the story-based building adventure. Players take on the role of a young apprentice builder who washes up on the Isle of Awakening alongside Malroth, a mysterious youth suffering from amnesia. Together, the two explore different islands while developing skills to become a “Master Builder” by helping townsfolk, crafting materials and fighting off enemies. 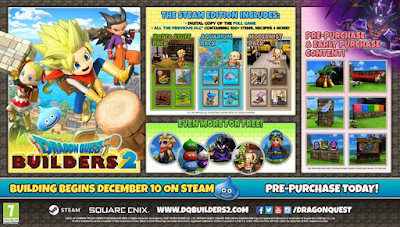