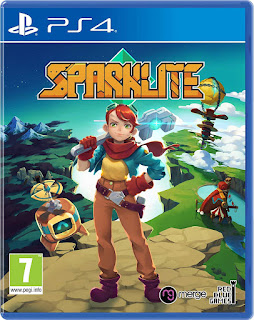 She was out cold when we first found her..." "She may fall...but she will get up and fight again!"

Start your adventure with Ada, our brave hero who has crash-landed on another world!

Sparklite is an action-adventure set in the whimsical and ever-changing land of Geodia. Battle foes in top-down action using an arsenal of gadgets, guns, and gear. Explore dangerous corners of the procedurally generated world, take down titans of the mining industry, and harness the power of Sparklite!

Email ThisBlogThis!Share to TwitterShare to FacebookShare to Pinterest
Labels: Sparklite