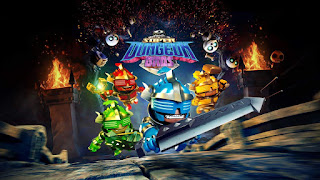 Watford, U.K — January 18, 2018 — Wired Productions, a leading games publisher, is delighted to announce that, the rock-n-roll inspired co-op dungeon brawler, Super Dungeon Bros is free-to-play January 18th-25th via Steam on Windows PC and Mac.
Prospective players can reacquaint themselves with the bros in the free week promo

The free week brings with it a 75% discount on both the base game and existing DLC, whilst also coinciding with the release of brand new content for the rogue-like action brawler. The Idols DLC which launches today brings with it not only cosmetic enhancements for your Bros and Broettes but also a whole new way to play with the Idols weapon class:

Add to your arsenal with new devastating ranged weapons that are worth worshipping. Control the enemy crowd by cursing, chilling, summoning and enveloping your enemies. In addition to the power of the Idols, unlock 8 more bro-tastic helmets and an all new Ultimate.

On top of the latest DLC and the game's new Horde mode (which sees the Bros defend their shack against endless waves of the most horrible monsters, free across all formats,) developer React Games has made a number of improvements to gameplay and matchmaking since the games launch.

In the multiplayer-centric Super Dungeon Bros, a band of heavy metal heroes are summoned to embark on a quest from the Gods of Rock. Their mission: to navigate the fantasy realm of Rökheim and seek out epic loot, vanquish hordes of evil undead and uncover the legends of long lost fabled rock stars! Featuring captivating, laugh out loud action and adventure, players can rock out on or offline with four bros as they fling their friends onto far off ledges and distant trap triggers, or unleash their best tag team tactics with the ultimate bro-op offensive. Legendary tools of destruction can be individually levelled up to carry progress across sessions, and players can unleash weapon-specific co-op attacks that grow in power as others join in, such as the Bronado (stack up to create a whirling totem pole of destruction).

Three unique and challenging worlds await the brave ones as they explore the rock-themed realm of Rökheim and dive deep into the worlds of Cryptheim (an underground dungeon complex), Chillheim (a brewery built upon a natural brew geyser) and Bogheim (a sprawling jungle filled with poisonous plants and animals). Players will never rock the same dungeon twice thanks to the random room generation AI, and near-endless dungeon combinations! To keep things fresh between campaign sessions, players are also able to assemble and compete against other teams in the daily and weekly challenges to see who can claim the top spot on the global leaderboards!

Developed by Utah-based React Games, Super Dungeon Bros is published by Wired Productions and physical retail distribution is handled by THQ Nordic. This title has been rated "E10+ for Everyone 10 and up" by the ESRB, PEGI 7 and USK 6.

For more information and to stay up to date with all the latest Super Dungeon Bros news, announcements and more, please visit the official website at www.superdungeonbros.com,
Like the game's Facebook page at www.facebook.com/DungeonBros or follow the Dungeon Bros on Twitter at https://twitter.com/DungeonBros