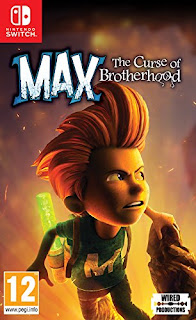 Review by Jon Donnis
Max The Curse of Brotherhood has finally made it's way to the flagship console of Nintendo, the Switch.
The game is a good few years old and has appeared on various other consoles, including Xbox One and PS4. Although straight away this game feels more at home on the Nintendo compared to the more hardcore gaming systems.

The basic story starts with Max finding a spell to make his annoying brother disappear, he does, then he has to rescue him in an alternative universe.

The first part of the game you find yourself going through your typical platform game run and jump stuff, you run away from a monster, but after a few levels you get a magic marker pen, and now you can use that to help you pass through levels, whether that is drawing a path to walk on or destroy obstacles. This is what makes this game different to all of the other platforms out there.

By having the use of a touch screen as opposed to just using a controller as on other consoles, this is what sets this version apart from the previous versions, and helps you understand what I mean when I said that the game feels much more at home on the Switch.

The game runs along at a good pace. There is never a moment where you find yourself truly stuck, or frustrated by lack of progress, and the marker pen element is interesting, although perhaps if a sequel to this game is ever made, more use could be made of it especially on console that has the touch screen element to it.

A fun game, and the Nintendo version is definitely the best version.

Email ThisBlogThis!Share to TwitterShare to FacebookShare to Pinterest
Labels: Max: The Curse of Brotherhood