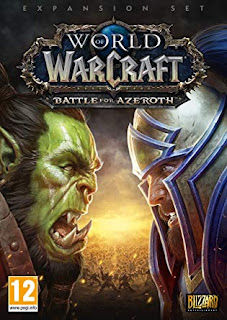 World of Warcraft: Battle for Azeroth reviewed by Joseph Bradford on PC.

Join the Battle for Azeroth and set sail to exotic, new lands amidst a world divided. The futures of the Horde and Alliance will be remade in the fires of war.

Enter a World Divided - Experience the relentless conflict at the heart of the Warcraft saga. Quest to level 120, play through six new zones filled with new World Quests, new World Bosses, new raids and more
Recruit Allied Races - Explore Azeroth as one of six new playable Allied Races, including four you've encountered in your campaign against the Legion. Embark on a quest to earn their favor and unlock each race, adding their strength to your faction.

Plunder Uncharted Islands- Set sail for the previously unmapped isles of Azeroth. Battle in groups of three as you race against cunning rival intruders-or enemy players-to collect the island's resources

Buy from Amazon by clicking here

Email ThisBlogThis!Share to TwitterShare to FacebookShare to Pinterest
Labels: World of Warcraft Battle for Azeroth