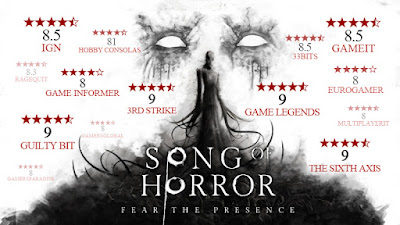 Barcelona, Spain - Tuesday 1st September 2020:
Having kickstarted its movement to both refresh and honour the survival-horror genre last Halloween with the very first episode of Song of Horror on PC, Raiser Games and Protocol Games have announced that the game will come to both PlayStation 4 and Xbox One as one single release on October 29th, 2020.

The release will comprise of all five episodes in one package, allowing console players to take on a thrilling paranormal story where the threat of The Presence, a dark entity that reacts to your way of playing, looms large throughout in one seamless flow, celebrating the first anniversary of the game's debut - a title that’s been in development for more than six years in total.

Song of Horror sees players set out to investigate the mystery of the disappearance of famed but now elusive writer Sebastian P. Husher - a man who, along with his entire family, has vanished without a trace. Taking on any one of 13 different characters, Song of Horror is a Lovecraftian, third-person adventure that pays homage to the classic masterpieces of the survival-horror genre.

"We have been blown away by the reception Song of Horror has had on PC, and now’s the time to broaden the game’s base and reach out to console players,” says studio co-founder Carlos Grupeli. “The survival-horror genre has such a history on both PlayStation and Xbox that it feels only right to bring our little ode to all that has gone before to an audience that truly appreciates real scares.”

At its heart, Song of Horror is a non-combat adventure where the focus instead is on running and hiding, staying silent in the midst of all the terror to avoid triggering unnerving manifestations, capable of bringing the game’s line-up to the brink of insanity. With the game’s ever-present foe The Presence keeping players on their toes from start to finish, Song of Horror’s mission to keep you severely spooked is one it never lets up on.

Song of Horror features: -
*A truly dynamic terror experience: its antagonist, the supernatural entity known only as The Presence, is controlled by an advanced AI (Artificial Intelligence) that reacts to your actions and decisions.
*Experience unbearable fear as this otherworldly being responds to your way of playing and hunts you down in unexpected ways, offering a unique experience to every player and gameplay where tension builds up naturally instead of coming from scripted sequences.
*Live this story through the eyes of a varied set of characters related to the story in their own way. Every character is different, and brings their unique point of view to the investigation, allowing them to approach clues and items differently.
*Their actions and decisions will shape the world: some of them will know more or less of certain aspects of the story; some will be more effective against supernatural manifestations, but all of them can die if the Presence gets to them – and death can be permanent. If they die, you will have to pick the story up with another one, and continue the investigation so their deaths are not in vain.
*A mysterious antique shop, a forgotten abbey, an abandoned mental hospital... Each location in Song of Horror is inspired by the classics of the genre. Explore and investigate these haunted places to gather clues and items that will help you solve challenging puzzles while enduring the agonizing tension of the game's atmosphere.

Song of Horror will launch on PlayStation 4 and Xbox One as one single release on October 29th, 2020.