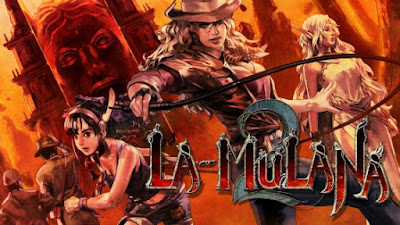 PLAYISM has announced that the indie hit La-Mulana 2 will be coming to PlayStation 4, Xbox One and Nintendo Switch. Furthermore, a physical version is in the works.

The long-awaited sequel to La-Mulana, La-Mulana 2 follows Lumisa Kosugi as she explores the ancient ruins of La-Mulana, desperate to find the cause of the numerous recent appearances of monsters from the ruins, Lumisa discovers “other” La-Mulana: the ruins known as Eg-Lana.

La-Mulana 2, which has been capturing the hearts of old and new fans alike, will be heading towards PlayStation 4, Xbox One and Nintendo Switch in Spring 2019.

LA-MULANA 2 features sprawling ancient ruins, mind-boggling mysteries, untold numbers of items, and terrible enemies woven together to form what is possibly the perfect Metroidvania-style “archaeological ruin exploration action game”.  As well as releasing on consoles, physical versions of La-Mulana 2 are currently being planned.

Email ThisBlogThis!Share to TwitterShare to FacebookShare to Pinterest
Labels: La-Mulana 2